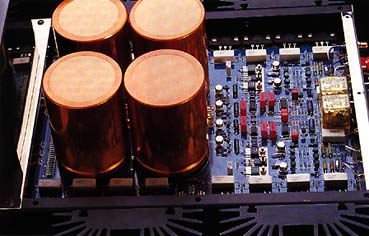 SHORTEST POSSIBLE SIGNAL PATH AVOIDS USE OF ANY WIRE

A prominent audio designer once described an amplifier as "A straight piece of wire with gain". This description whilst electrically apt, neglected the sound of wire itself, let alone the sound of the amplifier circuits supplying the gain.

Accordingly, all MAS preamplifiers and power amplifiers use the absolutely shortest possible signal path in a commercial amplifier. We do not use wire in any of our signal paths and every component is directly soldered to one large printed circuit board. To eliminate any potential contact contamination problems, all our switches and controls are sealed.

Our IRAKLIS, SOLITAIRE and SOLILOQUY power amplifiers in particular are uniquely designed to have the absolute shortest signal AND power supply path of any known commercial amplifier.
From input to output, the signal passes through no more than 150mm of P.C. track. The transformer is connected with only 40mm of wiring to the PC board. This is only possible with our unique construction which features the complete amplifier (including filtering capacitors) assembled onto one single rectangular Printed Circuit Board where the four sides connect directly to the inputs/outputs, power transistors on their heat sinks and power transformer.
The CHARISMA, MARQUIS and OPULENCE preamplifiers pass the audio signal from the RCA inputs through all the controls to the RCA outputs through no more than 800mm of overall wiring. This modifies the audio signal less than going through one metre of high quality audio interconnection cable.
The audio signal passes through ONLY ONE TYPE OF WIRE which is our high speed, wave controlled oxygen free copper of our PC board.

Using ground plane technology allows us to ensure the absolute long term stability and sound quality consistency of our circuits so that we do not have to reduce the speed of our amplification and power supply regulation for real world use.
To explain this fully, please consider the difference between a sports car with a 2 litre engine and a normal mass-produced car with a motor of the same capacity. The sports car would be more carefully designed and assembled by experts to extract 80-90% of the full potential of its 2 litre motor in its everyday use.
The normal mass-produced car with the same capacity by comparison would extract no more than 50-60% of the motor's power simply because of the differing manufacturing tolerances and the fact that it just be reliable with less time spent in its production.

MAS products are sports cars. We design them to be at at the cutting edge of today's technology, but more importantly we design them to operate flawlessly at the cutting edge by ensuring that every transistor is tested and matched according to the original design specification.
This of course is far more difficult as an engineering feat than what is considered normal in electrical engineering circles; which is to design the circuits and then dilute their real world performance with excessive lag compensation which reduces the slew rate, rise time and overall performance to ensure that the circuits are stable using only unmatched, high or low gain transistors in production. 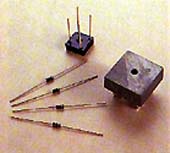 Every power amplifier uses a large, high-current power transformer which feeds a 'high-current' bridge rectifier to convert the AC from the transformer into DC voltages which are then mains ripple filtered using massive, computer grade capacitors.
The rectifier bridge that is normally used is relatively large, handles high current and low voltage which slow switching speed because of its inherent high internal capacitance.
It has a response time measured in milliseconds which if converted to frequency would mean that it would have a frequency response from DC to around 100Hz (or 1 kHz). Frequencies above 1 kHz would be unable to draw current instantaneously from the power transformer and would need to rely on the charge stored in the large filtering capacitors whose capacitance decrease with frequency because of their high internal impedance.
These capacitors are designed to operate optimally at 50-150 Hz to reduce the frequency of the mains 50-60 Hz ripple, and its second harmonics at 100-120 Hz and therefore are unable to supply significant instantaneous energy reserve at high frequencies.

MAS power amplifiers replace this slow DC rectifier with ultra high speed diodes wired in parallel with switching times in 'nanoseconds' which when converted to audio frequencies have a frequency response from DC-10 MegaHertz.
High and low frequency currents can be drawn from the power supply more effortlessly to drive difficult speaker impedances which sonically translates to an increased sense of focus on the sound stage with superior bass and high frequency dynamics.
Because of their high voltage operation, VALVE amplifiers have traditionally used discrete diodes which partly explains one of the reasons of their sound quality.